An Addendum to the Audiobook of 20 Compelling Evidences That God Exists by Kenneth D. Boa and Robert M. Bowman Jr. 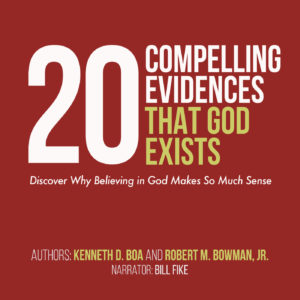 Chapter 1: The Evidence of Reality

Boa, Kenneth D., and Robert M. Bowman, Jr. Faith Has Its Reasons: An Integrative Approach to Defending Christianity. Colorado Springs: NavPress, 2001. In this book we explain the different ways Christians for the past two millennia have gone about showing that Christianity is reasonable, and we explain how those different approaches complement one another.

Moreland, J.P. Love God with All Your Mind: The Role of Reason in the Life of the Soul. Colorado Springs: NavPress, 2001. Why the Christian faith encourages the cultivation of critical thinking skills.

Chapter 2: The Evidence of Knowledge

Copan, Paul. “True For You, But Not For Me”: Deflating the Slogans that Leave Christians Speechless. Minneapolis: Bethany House, 1998. “That’s true for you, but not for me.” “Who are you to judge others?” “Christians are so intolerant.” Have you ever said or thought these things, or wondered if these statements were right? Copan considers these and similar statements and explains why Christians need not be intolerant or bigoted when they affirm that God is real and that He has revealed Himself in Jesus Christ.

Sire, James W. Why Should Anyone Believe Anything at All? Downers Grove, Ill.: InterVarsity, 1994. An intelligent, insightful book, discussing the question posed in the title.

Chapter 3: The Evidence of Existence

Geisler, Norman L., and William D. Watkins. Worlds Apart: A Handbook on World Views. 2nd ed. Grand Rapids: Baker, 1989. An easy-to-follow introduction to the major worldviews, highlighting both the strengths and the weaknesses of each.

Chapter 4: The Evidence of the Universe’s Beginning

Jastrow, Robert. God and the Astronomers. New York: Norton, 1978. An agnostic and professional astronomer tells the story of the triumph of the big bang theory and its religious implications over the resistance of scientists.

Ross, Hugh. The Creator and the Cosmos: How the Greatest Scientific Discoveries of the Century Reveal God. 2nd ed. Colorado Springs: NavPress, 1999. A Christian astronomer details the discoveries of the last decade of the twentieth century and explains how they support belief in the God of the Bible.

Chapter 5: The Evidence of the Universe’s Fitness for Life

Ross, Hugh. “Big Bang Model Refined by Fire.” In Mere Creation: Science, Faith and Intelligent Design, ed. William A. Dembski, 363–384. Downers Grove, Ill.: InterVarsity Press, 1998. One of several writings in which Ross sets forth the evidence for the fine-tuning of the universe and of the Earth.

Swenson, Richard A., M.D. More Than Meets the Eye: Fascinating Glimpses of God’s Power and Design. Colorado Springs: NavPress, 2000. A nicely-written popular presentation of the scientific evidence that God is behind the “coincidences” of the cosmos.

Chapter 6: The Evidence of Life’s Origin

Shapiro, Robert. Origins: A Skeptic’s Guide to the Creation of Life on Earth. New York: Summit Books, 1986. While refusing even to consider the possibility of a Creator, Shapiro masterfully explains why naturalistic explanations of the origin of life are not holding up scientifically.

Chapter 8: The Evidence of a Fallen World

Lewis, C.S. Mere Christianity. New York: Macmillan, 1952; reprint, San Francisco: Harper, 2001. See chapter 1, “Right and Wrong as a Clue to the Meaning of the Universe,” for a wonderful treatment of the question.

Chapter 9: The Evidence of the Bible’s Reliability

Wegner, Paul D. The Journey from Texts to Translations: The Origin and Development of the Bible. Grand Rapids: Baker Books, 1999. An excellent, up-to-date, and readable textbook on the origin and reliability of the text and collection of books of the Bible.

Chapter 10:  The Evidence of the Bible’s Accuracy

Geisler, Norman L., and Ronald M. Brooks. When Skeptics Ask. Wheaton: Victor Books, 1990. Excellent popular-level discussion of questions about the reliability and accuracy of the Bible, with a helpful discussion of the problem of the dating of the Exodus and Conquest.

Sheler, Jeffery L. Is the Bible True? How Modern Debates and Discoveries Affirm the Essence of the Scriptures. San Francisco: Harper; Grand Rapids: Eerdmans, 1999. While denying that the Bible is perfectly accurate in all respects, Sheler, a reporter for U.S. News & World Report, shows that the Bible is credible and historically reliable.

Chapter 11: The Evidence of the Bible’s Fulfilled Prophecy

Payne, J. Barton. Encyclopedia of Biblical Prophecy: The Complete Guide to Scriptural Predictions and Their Fulfillment. New York: Harper & Row, 1973. The title is no exaggeration; a massive compendium of biblical prophecies with information and analysis concerning their fulfillment.

Chapter 12: The Evidence of the Bible’s Profound Wisdom

Chapter 13: The Evidence of Jesus’ Life

Wright, Tom. The Original Jesus: The Life and Vision of a Revolutionary. Grand Rapids: Eerdmans, 1996. Popular-level book by a renowned historical Jesus scholar, offering a fresh look at the life and teachings of Jesus.

Chapter 14: The Evidence of Jesus’ Claims

Boyd, Gregory A. Cynic, Sage or Son of God? Recovering the Real Jesus in an Age of Revisionist Replies. Wheaton, Ill.: Victor Books—A BridgePoint Book, 1995. The biblical scholars offering the most sophisticated defenses today of the theory that Jesus was merely a great religious teacher are John Dominic Crossan and Burton L. Mack. Boyd examines their positions and arguments in detail and shows their deep flaws. Boyd gives a shorter, more popular treatment of the same issues in Jesus Under Siege (Wheaton, Ill.: Victor Books, 1995).

Kreeft, Peter. Between Heaven and Hell: A Dialog Somewhere Beyond Death with John F. Kennedy, C.S. Lewis and Aldous Huxley. Downers Grove, Ill.: InterVarsity Press, 1982. Kennedy, Lewis, and Huxley all happened to die on the same day. Kreeft imagines a dialogue between the three men as they await their final disposition, with Lewis defending Christianity in answer to the challenges of Kennedy the humanist and Huxley the mystic. The centerpiece of Lewis’s case is the evidence of Jesus’ claims to deity.

Chapter 15: The Evidence of Jesus’ Death

Geisler, Norman L. Encyclopedia of Christian Apologetics. Grand Rapids: Baker, 1999. The articles on “Christ’s Death” (142–150) give a good overview and response to Muslim arguments against Jesus’ having died.

Hengel, Martin. Crucifixion in the Ancient World and the Folly of the Message of the Cross. Philadelphia: Fortress Press, 1977. Excellent historical study on the significance of crucifixion in New Testament times and later.

Craig, William Lane. Knowing the Truth about the Resurrection: Our Response to the Empty Tomb. Ann Arbor, Mich.: Servant Books, 1991. Craig may be the most published author in history on the resurrection of Jesus; this is an excellent overview of the subject written for a general readership.

Walker, Peter. The Weekend that Changed the World: The Mystery of Jerusalem’s Empty Tomb. Louisville, Ky.: Westminster John Knox Press, 2000. Interesting exposition of the events surrounding the discovery of the empty tomb, offering numerous specific details based on archaeological research.

Chapter 18: The Evidence of Those Who Lived for Christ

Chapter 19: The Evidence of Those Who Died for Christ

Elliot, Elisabeth. Through Gates of Splendor. New York: Harper, 1957; rev. ed., Wheaton, Ill.: Tyndale House, 1986. One of the most beloved Christian books of the twentieth century, by the missionary widow who helped lead a violent Huaorani tribe to Christ.

Chapter 20: The Evidence of the Uniqueness of Christ

Lutzer, Erwin W. Christ Among Other gods: A Defense of Christ in an Age of Tolerance. Chicago: Moody, 1997. Explains why Jesus Christ is the only Savior.

Zacharias, Ravi. Jesus Among Other Gods: The Absolute Claims of the Christian Message. Dallas: Word, 2000. Through a series of studies in the Gospel of John, Zacharias shows how Jesus meets human needs like no one else can.

Note: You can purchase this book in print here.

Check out more apologetics resources on our site here and science-specific resources there.