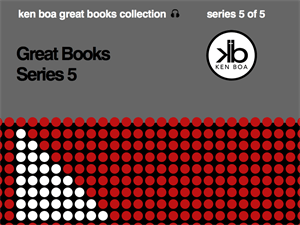 Purchase the complete set and save 40%.

Want to be mentored by some of the greatest Christian minds of the past? Need a little help understanding or previewing some great classics? Dr. Boa provides interesting glimpses into the life of the author, explores the main themes of the book and excerpts important passages. Includes all 37 classics from Series 1 through 5 including:

Series 1 of 5 – Anna Karenina by Leo Tolstoy; Cost of Discipleship by Dietrich Bonheoffer; Crime and Punishment by Fyodor Dostoyevsky; Dark Night of the Soul by St. John of the Cross; East of Eden by John Steinbeck; Faust by Johann Wolfgang Von Goethe; Institutes of the Christian Religion by John Calvin, The Knowledge of the Holy by A.W. Tozer; The City of God by Augustine;

Series 2 of 5 – Les Miserables by Victor Hugo; Lord of the Rings by J.R.R. Tolkien; Middlemarch by George Eliot, Moby-Dick by Herman Melville; My Utmost for His Highest by Oswald Chambers; Orthodoxy by G. K. Chesterton; Pride and Prejudice by Jane Austen; The Problem of Pain by C.S. Lewis; Religious Affections by Jonathan Edwards;

Series 3 of 5 – A Serious Call to a Devout and Holy Life by William Law; Christian Perfection by Francois Fenelon; Confessions by Augustine; Mere Christianity by C.S. Lewis; Paradise Lost by John Milton, Penseés by Blaise Pascal, The Brothers Karamozov by Fyodor Dostoyevsky;

Series 4 of 5 – The Divine Comedy by Dante Alighieri (in two parts); The Great Divorce by C.S. Lewis; The Imitation of Christ by Thomas à Kempis; The Love of God by Bernard of Clairvaux; Pilgrim’s Progress by John Bunyan; The Pursuit of God by A.W. Tozer; The Screwtape Letters by C.S. Lewis;

Series 5 of 5 – Abandonment to Divine Providence by Jean-Pierre de Caussade; Fear and Trembling by Søren Kierkegaard; The Odyssey by Homer; and Poems of George Herbert.